Which ProMediaGear Universal L-Bracket should you get?

Getting a universal l-bracket for your camera is a wise choice. It offers a lot of advantages that greatly help while shooting. But what if your camera does not have a custom bracket available? The good thing is ProMediaGear has got you covered.

Choosing among the ProMediaGear Universal L-brackets might be confusing for starters. But it is not that hard to pick the best one for your camera.

To start, there are four different universal brackets available. Each one is assigned to certain camera body types. Whether you are shooting a mirrorless or a DSLR, there is an L-bracket for you.

That being said, here the brackets to choose from. 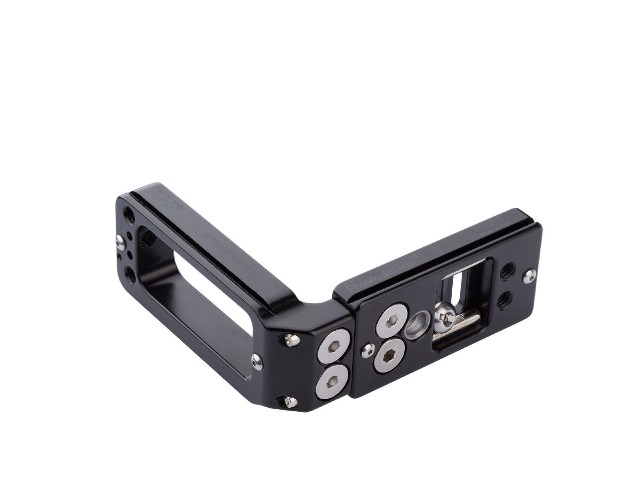 Now, if you are using a mirrorless camera then the ProMediaGear PLX3X Universal L-Bracket is for you.

This bracket is designed for mirrorless cameras without a battery grip installed. It will fit the Sony Alpha series as well as the Nikon Z7 mark II and a whole lot more.

Other features include mounting points for LED lights, flash brackets, and other accessories. There is also an advanced cable port protector. If you are using a shoulder strap, do not forget to check out either the SS2 or QD option. 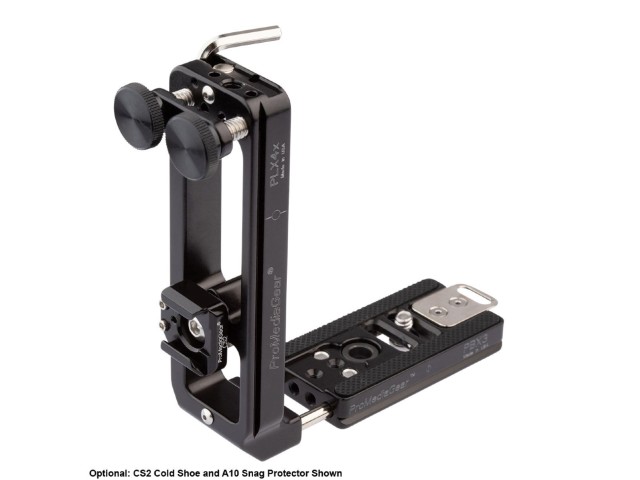 If your camera has a vertical battery grip, then this is the one you are looking for. The ProMediaGear PLX4X Universal L-Bracket is similar to the PLX3X but with a larger frame.

This bracket is compatible with a DSLR or a mirrorless camera without a fully-articulating screen that has a battery grip attached to it. This may be useful for event photographers who need a lot of juice in their camera.

Compatibility with the Canon 5D series, Sony A7R, or the Nikon D850 is not a problem. The 4-inch Arca-Swiss base plate can easily fit into the bottom part of the camera.

Just like any other ProMediaGear L-Brackets, the PLX4X has an optional cable protector if you need one. There are cold shoe mounts as well for your external microphone or flash.

Does it fit the camera and the battery grip well? Definitely.

This L-bracket has been tested with different cameras and it fits the body perfectly. It is done through a CNC precision machine making it a perfect match for your compatible camera.

If that is not good enough, it even comes with a 5-year warranty. 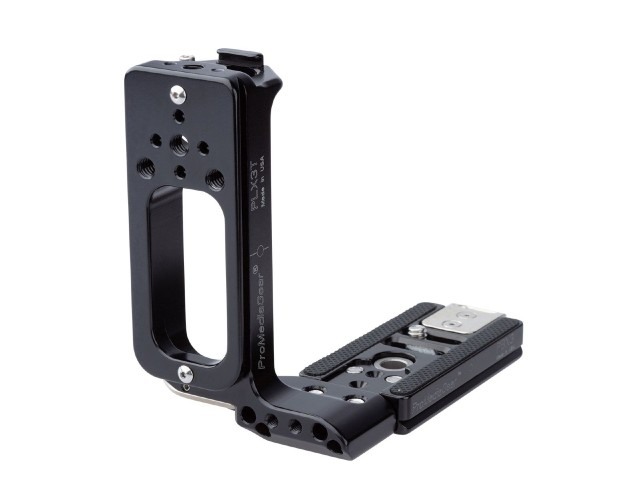 The name schemes are quite confusing, but the ProMediaGear PLX3T and the PLX3X have a major difference.

At first glance, the PLX3T might look the same. However, this model is created for DSLR or mirrorless cameras with a fully-articulating screen.

The vertical part of this L-bracket is offset to make way for the articulated screen. This opens up the port area as well and cables can be easily attached.

The features of this L-bracket are the same as the other ones. There are cold shoe mounts all over. Plus the cable port compatibility is still there.

Moreover, cameras with articulated screens are often used by videographers. With this bracket, the ProMediaGear HB70 handle can be attached to the side. This makes it easier to control and handle the camera while taking a video. 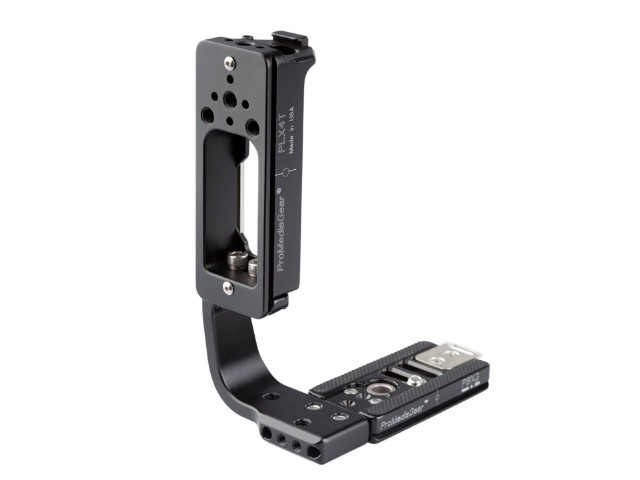 As you may have guessed, the ProMediaGear PLX4T is the taller version of the PLX3T. It is made for DSLR or mirrorless cameras with articulated screens that have a vertical battery grip.

The side of the L-Bracket is off-center to make space for the tilt screen. The lower vertical part is also shaped to fit the vertical battery grip. It is wide open for easy access to the grip’s dual-battery compartment.

Other features remain the same. The port can easily be accessed, while cable protectors can be attached. The two choices of SS2 type or QD camera port are there for shoulder strap users.

Cold shoe mounts can be found on the vertical plate, plus several ¼-inch threads are scattered for accessories. Just like the PLX3T, it is also compatible with the ProMediaGear HB70 handle.

Durability remains the same as it still made of aircraft aluminum and is CNC machined.

These are the four ProMediaGear Universal L-Brackets available today. The names are confusing. But hopefully, with this guide, it is now clear what model you should get. Do not forget to check out the ProMediaGear custom L-brackets as well. Your camera model might have one in-store.

Why should you get a Universal L-Bracket?

There are several reasons why you need an L-bracket. But the main reason is it makes it easier to shift between shooting portraits and landscapes. It also helps in balancing the camera by distributing the weight evenly. The weight is not focused on one side compared to when using a regular ball head.

Besides that, using an L-bracket protects the camera from bumps and falls. Sure, only two sides are protected, but the aluminum plates can absorb bumps and dings during bumps. Nobody wants to drop a thousand-dollar camera for sure.

Other than that, using a universal L-bracket is cheaper in the long run. Why? Because you do not need to buy a new custom-fitted L-bracket whenever you change your camera body. This is also advantageous if you have multiple camera bodies available. Just use it on the camera you need for the day.

For example, if you are shifting from the Sony A7R IV to the Canon EOS R5, swapping the L-brackets would be easier instead of buying a new one.

However, there are times when a custom-fitted L-bracket is a better choice. For an added cost, you are getting a bracket that fits the camera tightly like a glove. When the anti-rotation feature kicks in, it reduces the tendency for micro stutters that may affect image sharpness.

These advantages come at a higher price tag though. It is up to you to decide if you need one for your camera. ProMediaGear custom L-brackets are available for cameras such as the Sony A7R IV, Canon EOS R5 and R6, and the Nikon Z7 mark II.

If your camera does not have one listed, then a ProMediaGear universal L-bracket is worth considering. Either way, it serves the same purpose at a more affordable price.